I want to share with you a project I will be working on over the next couple of months. It’s called “Thunderbird” and it’s a permanent installation at the Wabano Centre for Aboriginal Health in Ottawa. I am excited and very honoured to be the Art Director of the installation. What’s particularly special about this magnificent relief sculpture is that it will be a collaboration with you and anyone who supports the Wabano Centre. 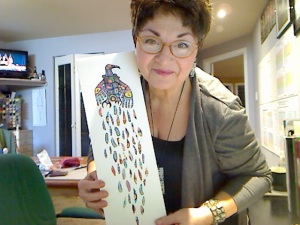 Together with Allison Fisher, Director of Wabano, we have come up with a woodlands inspired design that represents the year of the Thunderbird. The installation is a 3′ x 8′ relief sculpture in polymer clay and wood. I’m holding a maquette of the design in this photo. The Thunderbird symbolizes power and provision, but also indomitable spirit and transformation.

The collaboration is a team effort between the Wabano staff, and myself but also includes the general public and supporters of the Wabano Centre. I will be teaching four art workshops at the Wabano Centre, the dates and times are listed below. This is an opportunity for you to participate in creating something beautiful and a symbol of respect and support for Ottawa’s Aboriginal community. The cost is only $25. which includes the class and all supplies, a boxed lunch or dinner and a printed tutorial to take home. If you enjoy participating in art nights or paint nites, this is a great value and a great way to unwind, connect with friends and have fun, all the while taking part in something spectacular. During the workshop you will learn how to create a feather relief in polymer clay in the colourful woodlands style. You will have the opportunity to make at least two feathers, one to take home, the other will become part of the art installation. Over 100 feathers will be part of this wall sculpture! As a contributing artist your name will be listed on the wall plaque as well as on all printed paper merchandise. The installation will be officially introduced at the “Igniting the Spirit” Gala, which takes place on June 21st. For more information on the Gala please visit http://www.wabano.com/events/wabano-events/igniting-spirit-gala-2016/

The workshops will take place at the Wabano Centre, located at 299 Montreal Road in Ottawa. Join us and be part of this inspiring art collaboration. To reserve your spot in one of the workshops please email me directly at maria@saracino.ca

The meaning of the Thunderbird as a Native American symbol varies according to the tribe and geographic location.

“Among the tribes of the Great Lakes, the Indians recognized supernatural spirits (Manitos) in all physical phenomena, animals, trees, rocks, or cosmic forces. Some dwelt in the sky, some on earth, underground, or underwater; some were helpful and others malevolent, such as ghosts, underwater monsters and cannibal ice giants (Windigos), and spirits were placated through prayers. Over all was a paramount deity, Kitchi-Manito, although this concept may be the result of Christian influence. Of major importance were the Sun, Moon, the Four Winds, the Four Directions, Thunder, and Lightning. Two great Manitos, the Thunderbird and the Underwater Panther, are dominant in Great Lakes mythology. The Thunderbirds were a class of spirits associated both with war, and with rain to nurture crops.” (Excerpt from North American Indian Tribes of the Great Lakes by Michael Johnson)

Thunderbirds are the rulers of all airborne species. These manitos could bestow many blessings on human beings including success in war.  Thunder and lightning were created by the flashing of their eyes and the flapping of their wings, bringing the rain that made the earth fertile. Besides power and provision, other symbolic Thunderbird meanings include indomitable spirit and transformation.