In a few weeks I’ll be setting up for a month long exhibit at the AOE Arts Council gallery in the Shenkman Arts Centre. The theme of the exhibit is “Canadiana”, a look at Canadian life and culture. While planning and working on some new pieces for this exhibit I decided to include a piece that reflects Native Canadian culture.  Although there are many things that define us as Canadians, when Canada shows itself on an international platform, Native Canadian dance and music, spirituality and the connection to nature comes to the forefront. So with this in mind I chose to do two interpretations of aboriginal dancers , “The Feather Dance” and “The Hoop Dancer”. 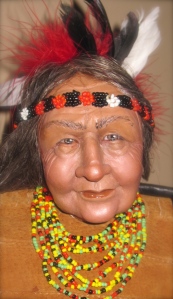 When I finished “The Feather Dance” I hesitated for a moment. I wasn’t sure about putting it on my exhibit list. There’s something called “Cultural Appropriation” that worried me. By definition it means taking intellectual property, traditional knowledge, cultural expressions, or artifacts from someone else’s culture without permission. This can include unauthorized use of another culture’s dance, dress, music, language, folklore, cuisine, traditional medicine, religious symbols, etc. It’s most likely to be harmful when the source community is a minority group that has been oppressed or exploited in other ways or when the object of appropriation is particularly sensitive, e.g. sacred objects, or it perpetuates stereotypes.

Examples of blatant “Cultural Appropriation” – when Victoria’s Secret had scantly dressed models parading the catwalk wearing Native headdresses. Or when Katy Perry dressed as a geisha to perform the song “Unconditonally,” which describes a woman who pledges to love her man no matter what, perpetuating the stereotype of Asian women as servile, passive, willing to weather any kind of abuse in order to keep him happy.

This subject has been explored, written about, studied and argued on every level, and is

still an ongoing issue. Because of this I hesitated about including this new piece in the Canadiana Collection. But after some thought and discussion, I feel confident that by definition it is not Cultural Appropriation – I am not presenting myself as an Aboriginal Artist, but rather am inspired by the beauty and history and have interpreted a moment I have seen into a sculpture. So, I’m happy to say that you can expect to see this sculpture in the Canadiana Exhibit with pride and with respect.

Dance is a common element of every Native American culture. Archaeological finds confirms the importance of dance to all indigenous people throughout the world. This powerful expression was used as a way to celebrate victories and acts of bravery in battle. Most dances have a great religious or social significance.

A Powwow was originally a spring event to celebrate the seasonal renewal of new life. People would congregate to sing, dance, renew old friendships and form new ones. Powwows are still very much a part of the lives of many Native Americans throughout the United States and Canada and are held every weekend, often at several locations during the peak periods from June until September. Many families “go on the circuit”, camp out and enjoy the traditional

activities. The circle, an important symbol to Native American people, is used extensively in powwows. The dancers are in the center, the drums and the audience circle around them and the concessions surround the gathering. The powwow brings the circle of people closer to family, friends and the comfort and vitality of their culture.

The “Hoop Dancer” above, is currently on display at the Rimawi Art Gallery in Rosemere Quebec.

Are you interested in seeing the CANADIANA Exhibit? Below is the information and times. I’ll be there demonstrating and discussing my work on July 26th from 1 to 3pm. 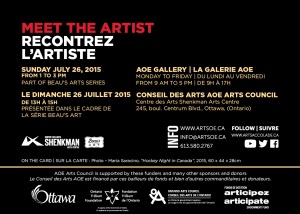