Yesterday, the cashier at Michaels Craft Store informed me that the company has changed it’s policy and every day is now “Seniors Day” – you don’t have to wait until Tuesday to get a discount. That means if you are 55+ you get an additional 10% off your total purchase any day of the week. Apparently the largest percentage of their customers fall in this age category. She was kind enough to stroke my ego and ask me if I was 55 yet which I appreciated as much as the extra 10% off. But, that got me thinking . . . more and more businesses are recognizing the power of the baby boomer consumer and marketing themselves to this age group. 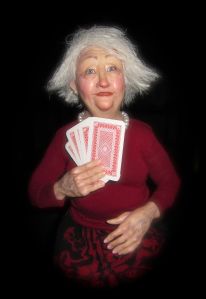 Even gambling Casinos recognize that this age group has the most disposable income and time. They have breakfast clubs, birthday clubs, retirement residence bus excursions and free senior bucks. As a matter of fact, the Casino has often been referred to as the new “Seniors Community Center”.

I’ve touched on the theme of age in the past with “The Selfie”, “The News” and several other sculptures, but I hope you’ll follow my work over the next few months as I explore this topic further. Here’s a peak at one of the new pieces . . . “Poker Face“.

Some facts to ponder from Canada’s last Census in 2011.

2 Responses to The Baby Boomer Era