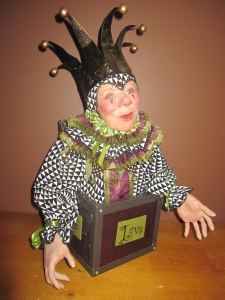 If you are from New Orleans, Carnival season starts right after the Epiphany on January 6th, with most of the celebrations concentrated in the two weeks leading up to Fat Tuesday. In Brazil, Venice, even in Quebec City, Carnival runs from January 31st to February 17th, 2015, the last day before Ash Wednesday and the beginning of Lent. This day is also known as Shrove Tuesday, Fat Tuesday, Mardi Gras, Pancake Tuesday and Giovedi Grasso to name a few.

Carnival is a time to celebrate and have fun. A common character during this period is the jester. Their hats, sometimes called the cap ’n’ bells or cockscomb are usually floppy with three points each of which there’s usually a jingle bell at the end. The three points of the hat represent the donkey’s ears and tail worn by jesters in earlier times.

In societies where freedom of speech was not recognized as a right, the court jester – precisely because anything he said was by definition “a jest” and “the uttering of a fool” – could speak frankly on controversial issues in a way in which anyone else would have been severely punished for, and monarchs understood the usefulness of having such a person at their side. Jesters could also give bad news to the King that no-one else would dare deliver.

In literature, the jester is symbolic of common sense and of honesty, notably King Lear, the court jester is a character used for insight and advice on the part of the monarch, taking advantage of his license to mock and speak freely without worrying about being thrown in the dungeons or even executed. Only as the lowliest member of the court can the jester be the monarch’s most useful adviser.

These are some of the jesters I’ve made over the years.