Posted on November 3, 2011 by mariasaracino

I have had several requests to show all the elves I’ve made since I started in 2000. Including the 2011 elves there are 31 elves in total. They didn’t all have names, some had pet names that I used to help me tell them apart, later I actually named them.  I’ll try my best to remember . . . here are the elves and the time line.

I actually started making original elves in 1999. I made 75 little characters and sold out in two days at a local Christmas show. That’s when I decided to try my hand at reproducing the elves in resin and offering them as a limited edition series. The first series was made available for Christmas 2000, but in a very limited quantity. I created five elves dressed in velvet knickers and sweaters. I can’t find the photographs, but here’s an article that appeared in DOLLS magazine that shows three of the characters from the very first year. Their names were Samuel, Gabriel, Sebastian, Bartholemew and Simon.  I made a very limited quantity of these elves, since I was still testing the market.  I sold out that season.

The following year, 2001, I introduced three new characters and increased the quantity I was making.  However, I did not give them names because most people were associating them with people they knew and renaming them. The 2001 Elves were dressed in the same knickers, but were wearing striped shirts instead of the sweaters. 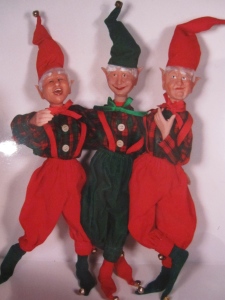 In 2002 we introduced a new costume and three new characters, including a grumpy character. The costume consisted of the same velvet knickers, but this time they were wearing checkered shirts with buttons and suspenders and instead of striped socks, they wore the solid coloured socks. Again, I didn’t name them, but I did have pet names that I used when I worked on them.  The laughing elf on the left reminded me of “Simon” from the first series, in the middle is “Bart” and the grumpy one on the right is “Malcom”.

By this time a circle of collectors were asking for the original elves so they could have the complete set, so three of the original series were re-introduced. They were wearing the original sweaters and had the striped socks.  Here are Samuel, Sebastian and Gabriel.

In 2004 we took a break and focused on selling our current stock. But in 2005 we introduced three younger characters in a more complex outfit. They were wearing the same velvet knickers but with little belted jackets with a ruffled peblum . We added a little fur trim to the collar and used checkered bows instead of the solid ones.We used the solid coloured socks as well. That season we found out my son and his wife were expecting twins, so if you met us at a show I definitley had twins on my mind and often posed two of the elf you see on the left as a twin set. I wish my memory was what it used to be, but the only name I remember in this collection was Franklin.

In 2006 along came my twin grandchildren – Leo and Eva as well as three new elves, including a bearded older elf called Frederick. These little guys were dressed in similar costumes to the 2001 collection, but we added a felt vest with a braided trim. We added the trim to the hats as well.  I wish I would have doubled the number of elves I made that year, especially the little old guy with the beard – he was a very popular elf with a very kind and gently face.

The 2007 collection featured three elves with no pants. They wore striped leggings and little jackets with tails that curled at the ends. The jackets were trimmed with a fuzzy piping and we added fur trim to the hats and the jacket collars. The elf in the middle was a little chubby elf. I still have a few sets available from this collection. We were at a show at the end of November when we found out our daughter was engaged. My son-in-law said the wedding plans started 5 minutes after their engagement. It’s true . . . 2008 was all about planning a wedding. I took a break to focus on my family and as it turns out on my health – an appendix attack landed me in surgery and forced me to slow down a little. I planned on getting back to making elves, but 2009 was about a new grandchild – Cameron was born on November 29th and I spent two months in Virginia helping out with the new family addition.

My customers were getting anxious – it was time to get back to making elves. I decided to make my comeback with something I had been promising my collectors for a while – a Santa scaled to complement the elves – and . . . to make up for lost time, instead of three, I introduced 5 elves with the Santa, including the first ever “girl” elf “Gwendolyn”. This time they were wearing felt overalls and we used the braided trim on the hats again. Gwendolyn proved to be very popular. I had resisted making a girl elf because tradition says that elves are only boys – the girls are fairies and pixies – but everyone loved her.  That’s why I made two girl elves this year. I still have a few complete sets of the 5 elves and the Santa available. 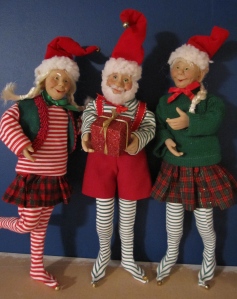 So here we are in 2011 and I’ve made the last collection in the elf series. I’ve pulled from what I know has been very popular in the past with Jacque, another bearded elf and two twin girl elves, Amanda and Emily. Elements from previous costumes have come forward such as the sweater, the felt vest and the fur trimmed hats. The girl elves are a little more involved to make with their checkered skirts and long braids, but they are perfect cheerleaders to end the series.

So if you have 31 elves you have the whole collection.

I have a little treat for my loyal customers – a chance to make your own elf.  I have a box of naked elves that are waiting for new outfits.  If you would like to create your own custom elf let me know and I’ll send you an elf and the patterns to make knickers, leotards, socks, t-shirts and overalls and skirts. They are $10. each but they are not available through my website – they are only available to my existing customers through this blog.  If you are interested you can email me at elves@saracino.ca

I tried this new recipe by Giada deLaurentis for Nutella Cookies and they are delicious. Try these, you are going to want to add these to your Christmas Cookie collection.

1 Preheat oven to 350F. Cream butter in an electric mixer for 3 minutes until light and fluffy. Add the sugars and Nutella and mix well, scraping down the sides of the bowl to ensure even mixing.

2 Add the eggs, one at a time, beating for 30 seconds between each. Add the vanilla and mix for 10 seconds.

3 Sift together the flour, cocoa, salt, and baking soda (do not skip this step as sifting eliminates clumps of cocoa). Mix into the butter mixture on low speed until fully incorporated, scraping down the bottom and sides at least once to ensure even mixing. Fold in the chocolate chips and hazelnuts and refrigerate the dough for ten minutes.

4 Spoon tablespoon-sized drops of dough onto parchment paper lined cookie sheets. Bake at 350F for 10-12 minutes. Allow to cool on the sheets for a minute or two before transferring to a wire rack to finish cooling.

Figurative Artist
View all posts by mariasaracino →
This entry was posted in Uncategorized. Bookmark the permalink.